Recently, Kalina hosted 14 Minnesota Trades Academy interns at the Ironworkers Local Union 512 in St. Paul. The Local Union provided the interns with a tour of the training facilities, gave them hands-on welding experience, and most importantly, empowered the interns to develop leadership skills. 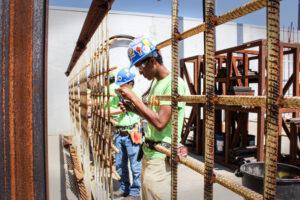 “The Minnesota Trades Academy is a virtuous training program,” Kalina said. “We knew we wanted to host an intern class because the program’s values align with ours. The interns practice accountability, communication, timeliness, and they respect each other and have each other’s backs.”

Kalina, an ironworker for more than 18 years, has seen a lot of job sites and worked with many companies and professionals before taking a full-time position as a training and apprenticeship coordinator with Local 512.

“To me, success means constantly seeking improvement,” Kalina said. “Status quo is never good enough and I have always personally pushed myself to become a better ironworker, trainer, friend, and person. The skills we practice on the jobsite are life-long career skills that carry over into our personal lives, such as how we treat other people and how we show up for our friends and family.”

Training the Next Generation of Ironworkers 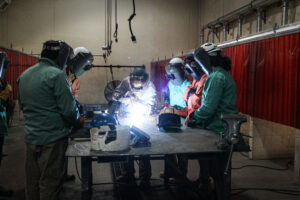 “Young people need programs like this,” Kalina said. “Real-world training, mentors in the career field, and they get paid so they take it seriously because it is a real job.”

Kalina and Ironworkers Local 512 have hosted Minnesota Trades Academy interns in previous years and continue to seek out student and work-based programs to support, inspire and recruit the next generation of ironworkers.

Interns started by learning the differences between reinforcing, structural and ornamental ironworking.

“It surprises people to learn that there are different types of ironworking, and each requires different skills and works in different locations,” Kalina said. “During our facility tour we get interns active. They do tie-off exercises on ladders, watch a torching demonstration, do some hands-on welding, tie reinforcing bars, and get on beams 14 feet off the ground to experience the way we work every day.”

Interns finish the day by having lunch with other ironworkers at the facility and having free time to ask them questions.

“Hosting MTA interns is a benefit for us, too,” Kalina said. “They ask questions that remind us of why we started in the trades and what we like about our careers. It’s also awesome to see young people engaged and many arrive knowing how to weld or researching our trades, you can tell they are serious and passionate and those are the kind of people you want on your crew.”

A native of Faribault, Minnesota, Kalina’s interest in construction started in the classroom and he’s thankful for that.

“My mom is a dietary manager and my dad worked in a factory and growing up on a hobby farm I can’t say I was really integrated into construction,” Kalina said. “However, I was an outdoorsy kid. I liked fixing things and I was an honors student. For a long time, I wanted to be a lawyer.”

Kalina said after years of bookwork in high school, he found that while he could do the classwork with ease, he had more fun in shop class. He took everything from woodworking to small engines and fabrication.

“I didn’t want to go into factory or office work,” Kalina said. “I wanted a career that challenged me mentally and physically.”

When Kalina joined the union as an apprentice he continued to push himself to be an exemplary student of the craft.

“The first day I walked down the training center halls I saw this ‘Outstanding Apprentice Award’ and right there I was motivated. I wanted that to be me,” Kalina said.

In 2014, Kalina also received that award upon graduating to journeyman status.

“I worked unbelievably hard to earn that,” Kalina said. “I earned every certificate I could in welding and became a Certified Welding Inspector (CWI) and I used the facility to my advantage to earn rigging certifications to be able to work on any job site.”

In his career as an ironworker, Kalina is most proud of the work he’s done in the Mall of America and bridges around Minnesota.

“I’ve helped build amusement rides at Valley Fair, MOA and worked overnights on our highways orchestrating bridge sets. I spent a lot of Saturdays tying rebar. I have immense pride in all of the projects that I have had a hand in building,” said Kalina, who was hired as the training coordinator for Local 512 in 2020.

“I have such a respect for the women and men who trained me and offered me new roles and challenges on job sites,” Kalina said. “I was honored to accept the training position with the union and continue to develop our program, which has been nationally recognized for its apprenticeship and skills training.”

“Before you call the union to schedule an interview or appointment, research our craft,” Kalina said. “Our work takes mental fortitude. It’s a tough gig being outdoors working in the winter or on a beam in the summer in 105-degree heat.”

“At the end of the day, ironworking is an incredibly rewarding career that builds iconic structures around our cities and rural areas, country, and the world,” Kalina said.

For more information about an ironworker apprenticeship with Local 512 visitwww.ironworkers512.com .