Minneapolis, MN — Juan Davila, 22, has always had a knack for building, but he hasn’t always been sure how to turn this strength into a lucrative career. 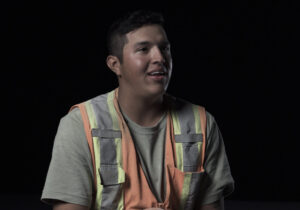 Juan Davila learned about opportunities in the construction trades from his older brother. In his free time, Davila enjoys being active through weight training.

“I’ve always been really good at building things, and I’ve always found a lot of pride in that type of work,” he said. “But no one ever talked about the construction trades as a career option.”

Every professional at Davila’s high school stressed two paths: entering college or joining the military. This led to a lot of confusion for Davila, who knew his potential lay elsewhere.

“I considered going to college, but I couldn’t stop thinking of all the debt that was going to be over my head. I really didn’t feel comfortable with that,” said Davila. “I also thought about joining the military, but I felt like I was giving up my life to do something that I didn’t really feel passionate about. So, I wanted to go a different way.”

“I’ve always found a lot of pride in that type of work, so I thought, ‘Let’s give it a shot,’” said Davila.

Davila is now in his second year as a cement mason apprentice with Cement Masons, Plasterers & Shophands Local 633 and he couldn’t be happier.

The change Davila feels goes beyond a mental one. His apprenticeship has allowed him to take significant life steps, though he is only in his second year.

“Last year I was living with my parents, and now I’m living by myself in the cities,” he said. “Through the union, I have a savings fund, pension, healthcare, dental, vision…everything. It’s really great.”

Part of Something Big

Davila’s most recent projects are some which are integral to the development of the Twin Cities. This serves to be a huge source of pride for Davila.

“I just finished Dale Street in St. Paul! That was my last project,” he said. “Now I’m on the big light rail project going on all over the city. So pretty much I drive to the cities, and I think, ‘Yep, I’m part of that.’ And it feels really nice to be able to say that.”

Davila cites his union membership as being one of the greatest parts of his apprenticeship.

“It’s amazing.  Everyone’s so involved with each other and works really well together,” he said. “They’ll show you everything you want to learn, and they’ll make you the best version of yourself. You feel like you’re part of something big, and that’s really nice.”

A Day on The Job

As a proponent for variety, and an outdoor-enthusiast, Davila loves that no day as a cement finisher is the same.

“It’s fun! Every day I’m at a whole new destination, working on something completely new,” he said. “You’re actually involved in nature, and you’re not just looking at one spot all day long, 24/7, for months. Sometimes you even see a bunch of deer run by. It’s so nice.”

For Davila, the technical aspects of the job are some of his favorite parts. He loves that, as he masters more skills, he can put his own flair on each project.

“Everyone, especially with finishing concrete, has their own technique in regard to how they want to learn. You pick a little bit of each and you find your own style.  That’s the best part about it: you get to figure out what works best for you,” he said.

The skills Davila learns through his apprenticeship will allow him to grow in his career and achieve his goals outside of work as well.

“I always wanted to have my own contracting business,” said Davila. “But most importantly, I have always wanted to build my own house completely from scratch, just by myself. I feel that would be really fun to do.”

Interested in a Rewarding Career in Construction Through Apprenticeship?

Those interested in exploring a career in cement finishing can visit https://constructioncareers.org/careers/cement-masons/ to learn more.

“I would say, go to the LOCAL 633, the cement finishers website. You can message or email them at the address listed, and they will contact you right away. They’ll tell you exactly what to do, how to join properly and how to find a sponsor right away,” Davila said. “You’ll definitely get paid a lot more than you would otherwise, you’ll learn a lot more skills that you can apply outside of work, and it will be more beneficial in the long run.”