Growing up in Bloomington, Indiana, Bryce Brahaum was a talented baseball pitcher and always enjoyed being a part of a team.

During Brahaum’s junior year of high school, he received a full-ride athletic scholarship to Illinois University for baseball and decided to take it.

After spending a year in Illinois, Brahaum transferred schools and moved to Minnesota to play up North on the Iron Range in Virginia, Minnesota. The now 28-year-old Brauhaum was eventually invited by the Minnesota Twins to try out for the team. Out of 3,000 prospects, Brauhaum finished in the top 30 qualifying players.

After finishing his baseball career, Brahaum was ready for his next step in life.

“I always felt like I had the niche for construction, so I decided to try it out,” Brahaum said. 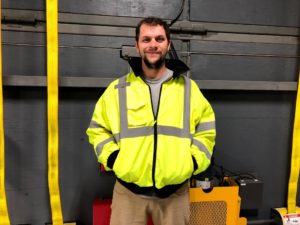 Brahaum’s love of baseball transfers to his career as a tile layer in the Minnesota construction industry. “There are so many parallels,” Brahaum said. “I work with amazing people and I am always surrounded by my ‘teammates.'” (PhotoCredit: Emily Sweeney)

He previously laid concrete but disliked the money management that came with non-union work. Through a mutual friend, he discovered a new career path in construction through a union apprenticeship included a variety of health and retirement benefits.

“I decided to try out tile laying through a union as an apprentice,” Brahaum said. “I’m happy I did, because I’ve never looked back.”

“Union work is my type of team,” Brahaum said. “I’m entering my third and final year of my apprenticeship, and my experience with the brotherhood and sisterhood is amazing.”

Apprenticeship as a Union Tile Layer
Tile layers are skilled craftspeople who prepare, lay out, and install various types of tile, including ceramic, marble and granite.

Through his apprenticeship with the BAC Local 1 Minnesota/North Dakota/South Dakota union, Brauham is getting paid to learn. He works a 40-hour work week and goes to class one day, every other week, for six hours to learn new skills of the trade.

“During the six hours of school, we’re only in an actual classroom for around 2-3 hours,” said Brahaum. “The remainder of the time we’re in the training center applying what we learned. The learning part is very hands-on. The teachers are really there to help you and they want you to succeed.”

“The camaraderie part of the guys and gals you work with is my favorite part,” Brahaum said. “My work environment definitely has a team-like atmosphere.”

Being an apprentice through a union also provides benefits like health care and a retirement pension.

“To have a pension is awesome. Even though I’m young, I’m saving for retirement and will be set from the union,” said Brahaum. “The benefits are truly amazing, the union really sets you up for success.”

Through Brahaum’s current construction company, he is able to work on some really cool locations around the Twin Cities metro area.

“My team worked on the new Minnesota Vikings facility in Eagan,” Brahaum recalled. “I enjoy competition, so the time crunch we were on made the work super exciting.”

Success in the Future
Brahaum’s advice to young adults deciding what to do after high school is “try and never look back, it’s definitely worth the journey.”

He looks forward to graduating from his apprenticeship and becoming a journeyperson. Brahaum hopes to become a foreman someday and lead his own team of tile layers.

“Being part of a union as a tile layer is one of the best things that’s ever happened to me,” Brahaum said.

Interested in an exciting career as a union tile-layer? Check out https://constructioncareers.org/apprenticeship/.