Ivis Carranza’s biggest role model in life is his grandfather, a man who showed him the value of hard work and encouraged Carranza to “take every opportunity to learn new things.”

At 20 years old, Carranza has already taken those words to heart. Before starting classes at St. Paul College, he decided to test out a career in the construction trades by signing up for a paid summer internship with the Minnesota Trades Academy.

The Minnesota Trades Academy offers two different tracks for students to learn about the construction trades through hands-on experience. Track I is a six-week introduction to construction career opportunities. Youth who participate in Track I can move onto Track II, a nine-week trade specialization course the following summer. The completion of both tracks can set a student up to launch a career in the construction industry, beginning with a registered apprenticeship with a Minnesota building trades union for those who are at least 18 years old and have earned a high school diploma or GED.

History in the Construction Trades

Carranza and his family know the value of hard work and the lifestyle that it provides. 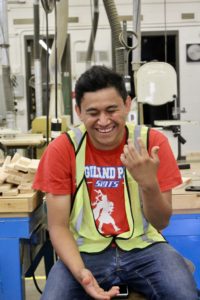 Ivis Carranza recalls memories of building with his grandfather. Carranza applied to the Minnesota Trades Academy internship to find a “path to a career.” Photo Credit: Karin Ellefson

“My grandpa was a carpenter and he was always teaching me about tools and showing me how to build things. My father has also done a variety of jobs in construction,” Carranza said. “I grew up around construction and ever since I was little kid, I’ve always looked up to my grandpa and wanted to be just like him.”

Although Carranza grew up around tools, The Minnesota Trades Academy taught him how to use many of these tools for the first time.

“Working in construction is much better than I expected it to be,” Carranza said. “In only a few weeks we’ve already made a birdhouse, a bench, a small stool and helped to install windows in a shed.”

Carranza’s favorite part about construction is how visual the process is.

“I can follow blueprints quickly, and watching someone demonstrate how to do a job helps me to learn quickly and understand what needs to be done right away,” Carranza said.

But he hasn’t always been a visual learner; Carranza said he resorted to this type of learning because a language barrier stopped him from understanding verbal and written directions.

“For me, speaking English is usually the hardest part of anything and sometimes reading directions is frustrating,” Carranza said. “But the Minnesota Trades Academy is nice because I get to keep working on my English and I can practice speaking it with my friends and coworkers. We learn from each other.”

Carranza’s family is from Honduras. He visits them at Christmas and can’t wait to see them again.

“I would love to keep visiting them but I am focusing on my education right now,” Carranza said. “Finding a career is my next step, traveling is great though, I hope to do more when I am older.” 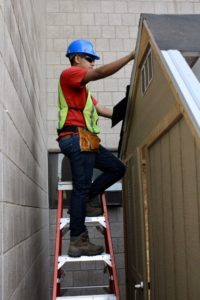 Carranza speaks Spanish and English. He often translates between both languages and wants to “include everyone to get the job done.” Photo Credit: Karin Ellefson

The Minnesota Trades Academy provides Carranza with that next career step he is looking for by giving him hands-on experience in the construction trades.

“I’m gaining a lot of skills but I am also working on how I speak and how I communicate my ideas,” Carranza said. “I’m totally considering a career in construction now. I’d like to go to school to work as an electrician.”

Throughout his internship, Carranza has learned that he brings his own unique set of skills to the construction trades industry.

“I like problem solving and I’m good at math,” Carranza said. He also wants to learn more about how electricity works and is excited to meet people from other trades on the jobsite.

Minnesota Trades Academy interns also tour a variety of construction sites and companies, to learn more about specific trades in the industry.

“We visited KFI Engineers and I met with people who started in the trades and became engineers — even chemical engineers,” Carranza said.

KFI Engineers is a process and facilities infrastructure design firm in Roseville, Minnesota.

“After I went on that tour, I thought, ‘Wow, yes a career in construction is for me,’” Carranza said.

Minnesota Trades Academy Site Lead Philip O’Neill sees great potential in Carranza and the skillset he brings to the job.

“What’s surprised me is how much enthusiasm these interns have,” O’Neill said. “They just needed some chances to see what other types of post graduation careers there were out there and for some of them the right option just clicks.”

And after finding a career path that inspires him, Carranza is sharing his experience at the Minnesota Trades Academy with others.

“I’ve already told a lot of my friends to do this program,” Carranza said. “You’re getting paid and you’re learning. It’s worth it.”

Just as important as sharing his experience with others, he’s also realized that he has important and useful skills to bring to the workforce that differentiates him from other people in the construction trades.

“Right now I work at a restaurant in West St. Paul where I translate between English and Spanish for my coworkers,” Carranza said. “Sometimes it’s hard to translate, but I keep practicing and I am teaching others whenever I translate, too. Communication is a big part of working in construction and I’m getting better at it every day — in two languages.”