Mahaila Houle’s first dream job was to be a ballerina.

Granted this was when she was four years old. Since then, she’s changed a bit. Houle, 23, went from future ballerina, to being a tomboy, to going to college for art, then psychology, and then on to motorcycle engineering.

With each experience, she’s learned more about herself, and over time, she discovered an interest in operating heavy equipment, such as bulldozers and excavating machines.

What connects Houle’s many interests is her curiosity about how things work.

“I was always really good at art, but my true interest lied in how things work. I’ve always liked learning about the mechanics of cars and machines, and also how the brain works. That’s what led me to majoring in psychology in college,” says Houle.

“I think everyone has an idea about what they really want to do when they grow up… it’s just that you don’t really know until you are grown up and you have the opportunity to actually try some of the things that you’re curious about,” she says.

In a way, Houle feels like her subconscious was manipulated by the “cookie cutter” ideas thrown at her and other students about going to college after high school, getting a good job, and starting a family.

“Everyone (especially her teachers at Carlton High School) said, ‘you’re good at art, you should go to college and get a degree in art,’” she says. 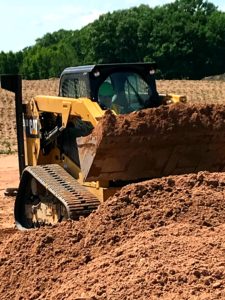 After taking her teachers advice, and then soon realizing she absolutely hated art school, Mahaila decided to learn about psychology. Once graduated with a degree in psychology from Fond du Lac Tribal and Community College (FDLTCC), Houle was on the job hunt. It was then that she began thinking about a job in a trade.

“I do not like being a damsel in distress,” says Houle. “For example, when I would bring my car into the repair shop for maintenance, I wanted to know what they were doing so I could just do the work on it myself.”

That interest in working on machines almost led Houle to move to Florida to enroll in a motorcycle mechanics program. Instead, she learned about a pre-training program for members of the Chippewa Tribe to learn how to operate heavy equipment through the International Union of Operating Engineers (IUOE), Local 49.

As a member of the Fond Du Lac Band of Lake Superior Chippewa, Houle jumped on the opportunity and applied for a training program offered once a year to learn to become a heavy equipment operator through the TERO office at Fond Du Lac. [Note: More information about TERO is located at the end of this article].

“During the TERO training program, there were 20 members of various tribal bands in my class. This went down to 10, and then only five graduated. To succeed it was important to have attention to detail, show up to class, and pass an assessment test,” Houle says. 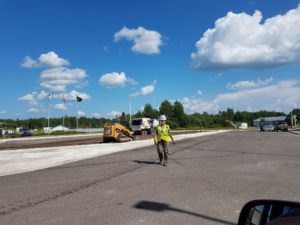 After completing the TERO program, each graduate needs to be hired by an approved contractor to be accepted in the Local 49’s four-year apprenticeship program.

“The TERO training program helps you learn the basics,” says Houle. “After that, it’s all up to you to take initiative.”

And initiative is something that Houle is definitely not lacking in.

On the reservation, Houle heard of a job that required a heavy equipment operator. Even though they had already hired someone, Houle decided to be there anyway in case the other operator didn’t show. Houle arrived at the site before anyone else that day and waited. Sure enough, the other operator didn’t show. The site manager asked her if she could operate the machines, and hired her on the spot for the job.

“You have to take initiative to get what you want. And be good at it,” says Houle.

Houle impressed the site manager with her skills and her willingness to learn. As a result, she was accepted into the Local 49’s apprenticeship program.

While she continues to work, Houle takes classes on a regular basis to learn about how to operate new machinery. During the winter months, when the company is not operating at full capacity, Houle takes more classes through the Local 49’s training center near Hinckley, Minnesota.

To Houle, the key to learning is asking lots of questions.

“What really helps me to learn is not being afraid to open my mouth. I ask a lot of questions all the time and I learn a ton because of it,” she says.

As a first-year apprentice, Houle has successfully adapted to her new career because she knows how important her job is and the importance of safety in performing it.

“When we’re on the job it’s really fast paced,” Houle says. “You’re taught the basics and then you’re on your way to do the job and learn while doing it. What’s most important in this high stress job is putting an emphasis on safety. We’re working on highways in heavy, continuous traffic with these massive machines that could crush any car, so you have to take your time and focus on being safe.”

Along with safety, a sense of security is huge for Houle. The Local 49 not only gives members the opportunity to be paid very, very well, there’s also security in the benefits offered.

“When looking back at all the things I’ve done, I was never guaranteed anything,” says Houle. “Finding a career where I have all these great benefits – a 401k, health insurance, a good pension – is so important. I’m only 23 and I’m building a financially stable life for myself. I can’t imagine not being a part of a union now.”

The Local 49 is dedicated to developing their members and giving them tools to succeed and enhance future career opportunities.

“I can basically improve my skills and get paid more if I choose to,” says Houle. “We get paid based on the equipment we have the ability to run. So since the heavier equipment is more complicated and dangerous, we get paid more if we’re able to operate them.”

“Being in a union, I know I’m protected in so many ways, and I’m really grateful to have found such a great community to be a part of,” says Houle.

While Houle’s journey has had lots of twists and turns already, she’s learned that by being persistent, you can find a career that matters to you. When thinking back to high school and her decisions for the future, Houle explains she never was informed about the option of going into the construction trades. That being said, she has no regrets for all the different career pathways she’s tried out.

“If you see something you think you want to try,” Houle says, “just go ahead and do it. It’s like a little taste test, and if you don’t like it, you don’t have to eat the whole thing!”

Now that Houle has found her dream job, she’s growing her roots in Cloquet, Minn. and building her dream home – an incredible feat for anyone looking for their lifelong career, let alone a 23-year-old.

“We all have these opportunities. You just have to go for it.”