William Quito is the type of person you want on your team.

Whether it’s on the soccer field, in the classroom or at work, Quito has a can-do attitude that motivates those around him to strive for success. 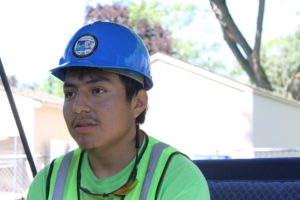 William Quito is an avid soccer player who enjoys being physically fit. He said the Minnesota Trades Academy is a “great way to stay in shape and get paid over the summer.” Photo Credit: Karin Ellefson

A rising senior at South High School in Minneapolis, Quito sees parallels between his favorite sport, soccer, and careers in the building trades. The thought of being on another kind of team, and staying in shape inspired him to sign up for the Minnesota Trades Academy (MTA), a paid summer construction internship experience for selected Twin Cities-area high school students.

“The Minnesota Trades Academy uses a lot of skills that I already use, such as teamwork and leadership,” Quito said. “On site we bond with each other, we have each other’s backs and we need to know where everyone is to protect each other.”

The Minnesota Trades Academy offers two tracks for students to learn about the construction trades through hands-on experience. Track I is a six-week introduction to construction career opportunities. Youth who participate in Track I can move onto Track II, a nine-week trade specialization course. The completion of both tracks can set up a student to launch a career in the construction industry, beginning with an apprenticeship with a Minnesota building trades union for those who are 18 and have earned a high school diploma or GED.

Quito said kids who enjoy being athletic and spending time outside should test out a career in construction.

Although Quito hasn’t taken any construction classes in high school, he arrived familiar with many of the tools he uses daily from his landscaping job last summer. And yet, one of the things he appreciates about the summer internship program is learning new things and being introduced to new tools. 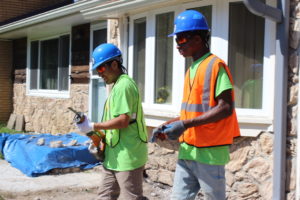 “At Minnesota Trades Academy, I got introduced to new things,” Quito said. “We went to Harding High School and learned woodworking, I looked across the table and saw tools I didn’t know.”

Although he did not start out confident with all of the tools, that didn’t stop Quito from being an invaluable member of the Track I team. He quickly grasped project blueprints and building details because of his favorite subject, math.

After high school, Quito is not sure if he will pursue a career in the construction trades but said the Minnesota Trades Academy internship program is definitely worth doing.

“I saw an opportunity and I took it,” Quito said. “It might lead up to something in the future but right now it’s a paid job where I’m learning good skills.” 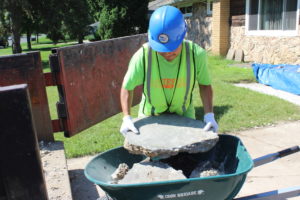 Quito throws concrete slabs into a dumpster at his Track I team’s Minneapolis worksite. The Minnesota Trades Academy gave Quito a variety of projects to build on his previous landscaping experience. Photo Credit: Karin Ellefson