An incoming junior at North Community High School in Minneapolis, Alejandro Anderson, was excited to join the Minnesota Trades Academy to start learning about his options after high school.

Like many Minnesota high school students, Anderson is interested in attending a four-year university after high school. And, like many students, he knows it’s not going to be cheap. So having some options is a good thing. 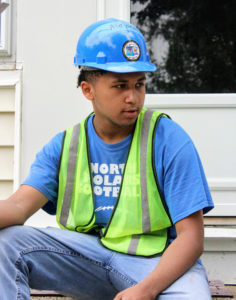 Anderson takes a break on steps outside of the project worksite. He applied for a paid summer internship with the Minnesota Trades Academy to explore pathways other than college or the military after high school. Photo Credit:Karin Ellefson

That’s where learning a trade might come into play.

The Minnesota Trades Academy offers two different tracks for students to learn about the construction trades through hands-on experiences. Track I is a six-week introduction to construction career opportunities. Youth who participate in Track I can move onto Track II, a nine-week trade specialization course. The completion of both tracks can set students with a solid start in the construction industry, which can lead to an apprenticeship for those who are at least 18 years old and have earned a high school diploma or GED.

“He knows I work hard, I show up, and I can follow orders,” Anderson said. “That’s why my coach told me I would be a great fit for the program.”

In his first weeks at the Minnesota Trades Academy, Anderson was surprised to find that he really enjoys the work. He was even more shocked when most of the work felt easier than he thought it would be.

“It’s taking your time, learning there’s no pressure, and that the site leads are there to help you,” Anderson said.

Another reason Anderson applied for a summer internship with the Minnesota Trades Academy was because of the pay.

“Most of my friends ask me how much I get paid,” Anderson said. “Most of them make around $11 but we make $12.50, this program pays more than my part-time job right now.”

He added that working in construction doesn’t mean lugging bricks around all day. In fact, there are many types of careers in construction that one can pursue, from being a tile layer to welding to becoming an electrician. As a member of a trade union, trade professionals have benefits such as healthcare, dental, vacations and pensions. Apprenticeships – where people new to a profession learn from skilled professionals — pay students to learn a trade.

“I learned that there are a lot of careers in construction,” Anderson said. “It’s also all about learning skills I can use in the future and how to work as a team.”

Anderson’s favorite project so far this summer has been working on building wooden go-karts. The team plans to race the carts once they finish building and testing prototypes.

“It’s really fun and it’s getting competitive between the groups in our team,” Anderson said. “We want to make sure everything runs smoothly but we want it to be aerodynamic so it’s not too heavy and can still move fast.”

Another benefit to joining the Minnesota Trades Academy was meeting a lot of other kids from throughout Minneapolis. 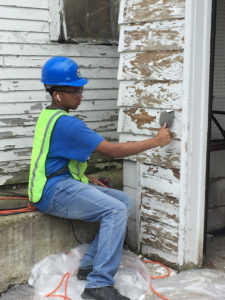 Anderson uses a 5-in-One Painter’s Tool to remove old layers of paint from the garage. Throughout the week, the team adapted to rainy weather conditions and executed on strict deadlines to finish the job. Photo Credit:Karin Ellefson

“I didn’t know anyone coming into the program but I’ve made a lot of friends since joining,” Anderson said. “We’re all from Minneapolis and we all work hard together as a team. We all get our work done and have fun.”

All it took was one internship and a few weeks of this summer, for Anderson to discover a whole new career field in construction and the building trades. He’s now knows he enjoys construction and is capable of doing it. And, it might be a career for him some day.

“I never really thought about construction as a career but once I started working with the tools and nails and stuff, it’s satisfying and rewarding to build something yourself,” Anderson said.