Once an Apprentice, Now a Training Director for Plumbers Local 15

Master Plumber Trevor Ogilvie graduated as a journeyman from Local 15 in 2006. Ogilvie has since served the plumbing field in a multitude of roles, most recently coming full circle as the union training director, leading apprentices through the same skills he learned earlier in his career.

Where others see obstacles, Trevor Ogilvie sees opportunities. When people bring up problems, Ogilvie thinks in terms of possibilities. This sentiment has served as the bedrock for Ogilvie’s successful career in construction as a plumber for Local 15.

Ogilvie grew up on the Iron Range in northern Minnesota. He knew college would mean taking on debt that he could not pay off and enrolling for classes he could not afford.

“I worked throughout high school, giving up on sports in order to focus on earning money,” Ogilvie said. “What I discovered was that I could earn money working with my own two hands. I took on side jobs doing construction, fixing machines and snowmobiles, and repairing fences – all involved skills that I could practice and master along the way.”

Ogilvie’s first jobs made him familiar with a variety of tools and practices.

“I started to notice people around me who made a living working with their hands,” Ogilvie said. “Whenever we built something or needed someone to fix a home, there was a person for roofing, someone for wiring, someone for framing but everyone needed a plumber.” 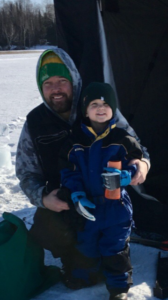 When he is not teaching plumbing apprentices, Ogilvie enjoys ice fishing, playing hockey and spending time with his family. PC: Ogilvie

Ogilvie saw firsthand how a career in plumbing represented a valuable skillset for people in his community.

“I didn’t grow up having family or friends in the construction industry,” Ogilvie said. “So, I learned through taking shop classes at Greenway High School and reading books on plumbing and piping. I was determined to learn this skill and pursue it as my career.”

From Apprentice to Educator

Ogilvie has served with Plumbers Local 15 for more than 20 years now. However, his job title has changed showing just how diverse this career path can evolve.

Since completing his apprenticeship program, Ogilvie has continuously sought growth within his profession. He has obtained his Master Plumber license, spent many years working in the field, successfully created and ran his own business, and then branched into the area of inspections. Throughout his career Ogilvie has served as an Officer for MAPMO, taught future plumbers in the Minneapolis Plumbers JJATC, and served on IAPMO’s Education and Training board as a committee member. Ogilvie’s passion for the field of plumbing is evident in all that he does. This passion is what guided him back to where it all began and nudged him into becoming the current Training Director.

“I want to educate people to better their lives in the same way I did,” Ogilvie said. “The opportunity to be a training director means I get the privilege to work with new apprentices from the Twin Cities, and surrounding areas. This career path has given me so many opportunities in my life, and I am proud to walk alongside those who will do the same for theirs.”

Ogilvie also recommends taking construction and shop classes in high school to learn the names and applications of tools and gain experience with tape measure math.

“When you sign up for an apprenticeship, stick with it,” Ogilvie said. “Plumbing is not an easy trade — it’s a very skilled, demanding, high-paced profession to learn, so you have to stay motivated and passionate to succeed.”

Insight into the Plumbing Trades

“Stop thinking of plumbing as a stereotypical job of unclogging toilets,” Ogilvie said. “The average person doesn’t comprehend the infrastructure of plumbing in buildings. It’s such a diverse trade — you can work on new commercial construction, rehabilitation of 150-year-old buildings in Minneapolis, you can even be employed by a city and do service and inspection work.”

In addition to getting a plumbing license, people in the plumbing career field can also earn a medical gas license, gasfitter license and ASSE certification for backflow to help protect public drinking water.

“You have so much room to grow a career in the plumbing field,” Ogilvie said. “You get to work full time while you go to school, earn a pension, have access to great health benefits and if you graduate out of the program — you leave debt free.”

During Ogilvie’s apprenticeship, he built two houses because he could work and afford a mortgage all while pursuing his education.

At this time, Plumbers Local 15 is accepting applications for apprenticeship through January 28, 2021. The application process is normally in-person but has been updated to accommodate online applications, too.

“We have a story on Construction Career Pathways News page that explains the work and apprenticeship process for Plumbers Local 15,” said Sarah Lechowich, senior director with the Construction Careers Foundation (constructioncareers.org). “We highly encourage students interested in starting a career right out of high school to apply now.”

“I have a phenomenal career as a plumber, I can’t imagine myself doing anything else,” Ogilvie said. “You can have this career, too but you’ll have to work for it.”