A job is never just a job. We get jobs to support families and pay bills. We learn new skills, and learn how to provide value to our employers and our customers. We meet new people – coworkers who become our friends or, maybe even become spouse. We contribute to our community and to our local growing economy.
And, when it comes specifically to the construction industry, we literally build our communities from the ground up.

A job in construction also comes with its complexities, too — job sites that post safety risks, bad weather, and stringent deadlines. A career in construction can be challenging. Even more so if you’re one of the few African-American women working at a construction site in the Twin Cities, where respect is difficult to earn for workers new to a job site.
Has that stopped Rasheda Jenkins?
Heck no.
That’s because Rasheda has overcome any reluctance to her being a woman and being black through hard work, perseverance, and simply showing up on time every day, just like everyone else. Construction work isn’t just a job for Rasheda; it’s a source of pride.
“Nothing beats driving past the Minnesota Vikings stadium or the Union Depot and hearing my children say, “Mom, you built that!” Rasheda says. “I know a lot of people who are in dead-end job. But I’m not, and I am very proud of what I do.” 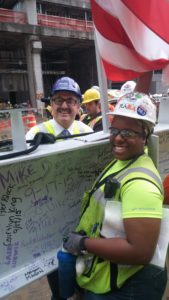 Rasheda grew up in the Rondo neighborhood of Saint Paul. After graduating from Central High School in 1998, as a single mom, she started out as a high school bus driver and later moved into cosmetology, doing hair and nails to support her family. She got into the construction industry in 2008 when she attended a career fair promoting jobs in construction. It was during this career fair that Rasheda learned about apprenticeship programs in construction through the Building Minnesota Apprenticeship program, which connects those who aspire to work in Minnesota’s construction industry with a union-led apprenticeship program.
The Building Minnesota Apprenticeship Program (BMA) is an entry-level, multi-craft training progra
m that provides opportunities for select individuals to enter a career within the construction trades industry. The program serves adult women, veterans and members of minority and immigrant groups who historically have been underrepresented in the construction trades.
“I never dreamed about being in construction,” Rasheda says. “I thought that my dream job would be as a receptionist.”
Being accepted into an apprenticeship program not only introduced Rasheda to the construction indu
stry, it gave her an opportunity to test out one of more than 30 different career tracks. Rasheda learned that she did not want to be carpenter but did learn that she wanted to become a laborer. Today, you can find Rasheda working on a building project for Minneapolis-based Adolfson & Peterson, one of Minnesota’s largest construction companies, setting up sites for specialized trade workers to do their work, and cleaning up specific portions of job sites.
“I remember my first day on the job. It was very confusing,” Rasheda recalls. “The foremen didn’t really like to work with new people. I felt like an idiot, but I found someone to help me figure it out. It felt like they were trying to get me to quit,” she adds. But, she persisted.
“I was going to prove to them and myself that I could do it,” she says.
As a school bus driver, Rasheda made $15 an hour. As a laborer, Rasheda makes $45 an hour with benefits. Without a college degree. An average non-union wage for a laborer sits at $12 an hour, but for a unionized job, the average wage is $34 an hour. 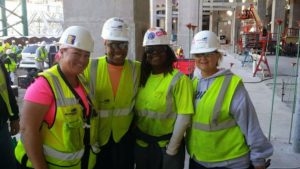 “The high wages of my construction career gave me something else — the freedom to marry someone
that I truly wanted to marry, instead of being with someone to help me pay the bills,” Rasheda says. “I met my husband, who is also a laborer, on the job and we’ve been together ever since.”
“This career has afforded us luxuries that we never could have afforded,” she says. “We don’t have to penny pinch. We can go to the movies and go bowling as a family.”
Rasheda enjoys a high-paying job, security for her children, and a great marriage. Having said that, Rasheda says she still needs to work hard to fight stereotypes as one of the few women in the construction industry. “Being an African-American woman can be a barrier to success,” Rasheda says. “I think it’s fair to assume at times that there’s a quota to fill.”
Rasheda has found several ways to challenge the idea that construction is only for men.
1.) “This job is not for the weak,” Rasheda says. “It’s really physical work. You have to be focused.” Rasheda and her husband regularly work out together so they can be in the best shape possible for their jobs. “It’s rare that you just hold a sign all day on the job site,” she says. “We’re really big on exercise.”
2.) “I’m always at the job site 15 minutes early and be ready to work hard,” she recommends. “I come prepared every day to show the men I’m there to work.”
Construction work isn’t just for men, and being a woman in construction doesn’t mean you can’t be yourself to succeed.
“I’m a girlie girl. My friends think it’s so cool – they can’t believe it when I show them the projects I’ve worked on, such as the Minnesota Twins Stadium, the Vikings stadium, Union Depot, and others,” she says. “This line of work isn’t for everyone, but I would tell any woman – you just have to try it.”
Rasheda also speaks up for all construction workers:
“I think a lot of people hold onto stereotypes of constructions workers that I think are not fair or accurate. They think that we are not smart enough to go to college or that we have some kind of criminal past,” she explains.
“Listen – we are smart, hardworking people, and there are a lot of college graduates out here working alongside me. The difference is that we want something different. We enjoy working with our hands. We like being in the outdoors. And yes, if you want leadership opportunities, you can be a supervisor, an engineer, or a safety director,” Rasheda says. “There are so many ways to be successful in construction.”
These bits of wisdom have helped Rasheda thrive in her career. And, with time, she hopes that she will change the way African-American women are seen in the construction industry and how the public sees the industry as a whole. Rasheda may be only one woman, but she’s been able to make huge strides for equality while building an exciting future for herself and her family.“If I wasn’t doing construction, I’d be sitting in a cubicle falling asleep,” Rasheda explains. “The future looks much better as a construction worker. That’s a future I want to share with other black women.”