In her senior year of high school, Julia Theobald received some advice that most young adults have never heard. 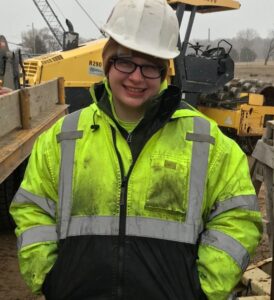 At age 18, Julia Theobald chose to pursue a construction trades apprenticeship. She eventually selected the role of Heavy Equipment Operator while working with Local 49.

Julia was told there was an option other than college or the military after high school. In fact, her stepfather advised her to not even bother with college.

“I thought, why would I go into debt when I didn’t even have a plan for what I wanted to study in college or where I wanted to be afterwards,” says Theobald. To say that this line of thinking came as a shock to her friends is an understatement.

As her friends and classmates at Zimmerman High School were applying to colleges or the military, Theobald’s news took them by surprise, in particular because she was an honor roll student and even a math tutor.

“Everyone around me just expected that I would to go the traditional route and get a college degree,” she says.

“I know people were shocked, but a career in construction just called to me. I knew it was the right fit,” says Theobald. “Unfortunately, I’ve seen five people that I graduated high school with drop out of college with a bunch of debt, while I’m here about to buy my first home. I wish more people knew of the option of going into a trade if they’re unsure about college.”

The possibility of a 21-year-old buying their first home might seem outrageous to the majority of college juniors and seniors her age, but not for someone like Theobald, who has been learning and earning for two years through the International Union of Operating Engineers (IUOE), Local 49, as a heavy equipment operator apprentice.

Before starting at the Local 49, Theobald,  started as a pre-apprentice, dedicating her time to gaining the training she needed at Summit Academy, located in Minneapolis, right off of Olson Highway.

“I actually learned about Summit Academy from my mom,” says Theobald. “She remembered seeing their commercials on TV and figured it’d be a great opportunity – and it was.” 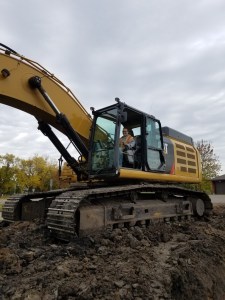 After 20 weeks of class, it was time to take the aptitude test, along with 100 other people hoping to ace it and have a chance of getting into the Local 49 apprenticeship program. Julia was one of ten people chosen to take part in the five-week pre-apprenticeship training that would prepare her for getting a job in the union. Once this was completed, Theobald was on the job hunt, looking to get hired by a union contractor and be on her way to starting the apprenticeship program with the Local 49.

“It’s hard work. I think some people don’t understand the knowledge and expertise that is needed to do what we do,” says Theobald.
“Becoming a part of the Local 49 absolutely transformed my life. Until my stepdad had mentioned getting into a union, I had no idea about this option while I was in high school,” she says. “Even during my pre-training, I didn’t quite realize how great getting into a union could be.”

The pay is great, but what’s even more exciting, there’s a ton of benefits to working in the union – good pension, great healthcare, ongoing training, and the option to invest in a 401k.

At the Local 49, apprentices get top training at a state-of-the-art facility in Hinckley, Minn., that has the ability to produce the best, most professional Operating Engineers in the industry. Once starting at the Local 49, apprentices get to earn while they learn, and begin building an unbeatable health (medical and dental) package and pension plan.