Graduating high school is a huge accomplishment. Now, imagine graduating twice in one summer and starting a career — that’s almost unheard of but not impossible. 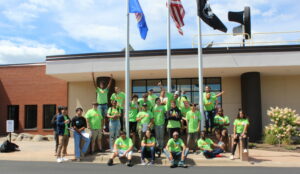 This year’s MTA intern programs were hosted by HIRED in White Bear Lake, Step Up in St. Paul, Right Track in Minneapolis and BrookLynk in Brooklyn Center and Brooklyn Park.

The graduation celebration, which took place in August at the International Brotherhood of Electrical Workers (IBEW) Local 110 union center, was a culmination of eight-weeks of hard work. Interns practiced hands-on construction skills and learned how to use new tools, measure and read blueprints. On alternating days, interns went on a whirlwind schedule of onsite tours, where they explored more than 20 careers in Minnesota’s construction industry through union training center visits.

“The Minnesota Trades Academy goes beyond preparing interns for a career in construction,” said Lindsay Tallman, Program Director for the Construction Careers Foundation. “It sets them up with trade skills, an OSHA 10 safety certification recognized by the State of Minnesota, and a network of mentors and construction professionals ready to help them secure a career.”

Tallman also noted the smart skills and social benefits that come with an MTA experience.

“Our interns are always practicing smart skills such as critical thinking, problem solving, leadership and work ethic,” Tallman said. “Interns arrive on time at their allocated site every morning and are expected to be dressed for the job and prepared to learn. At the end of each week, they collect a paycheck for their work and build friendships and camaraderie with their teams throughout the internship.”

Crossing the Stage with an Apprenticeship in Hand

The intent of the Minnesota Trades Academy is to lay the foundation for young people to secure apprenticeships with various construction and building trade unions. For two young people, participating in the MTA internship program led exactly to just that – a full-time, paid apprenticeship. Two more interns are in the process of registering for an apprenticeship and one intern is already enrolled in a welding program.

“By the third week of the program, we were placing interns in construction apprenticeships,” Tallman said. “To say we’re ecstatic for them is an understatement, this is everything we want for every one of our interns.”

Diversity and Discovery in the Trades

“This year’s Minnesota Trades Academy class is historically the most diverse class to graduate from the program,” Tallman said. “Interns came from a variety of religious and ethnic backgrounds and represented African, Hispanic, Hmong, and Somali populations.”

Tallman added: “Providing equal opportunity and access to careers in construction at an early age is critical for young people, especially when representation of diversity in the construction industry is overall lacking.”

Another achievement for the class – 20 percent of graduating interns were women.

“To have intern classes with multiple women interested in pursuing careers in the trades is very exciting,” Tallman said. “All of the women in Minnesota Trades Academy have either expressed an interest in pursuing a career in construction or qualified for an apprenticeship based on their history and interest in building and shop courses in high school.”

Get Involved with the Minnesota Trades Academy

Learn more about the Minnesota Trades Academy. For further construction career exploration check out more than 30 career spotlights on ConstructionCareers.org