When a football coach needs speed, he calls on William Thomas-Brown. 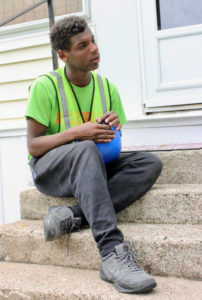 Thomas-Brown said he was intimidated at first about learning all of the tools. However, he can now identify most tools on the job site because of the Minnesota Trades Academy’s introductory to tools class days. Photo Credit:Karin Ellefson

Not many student athletes can match Thomas-Brown’s high energy on and off the field, and even fewer athletes have the endurance to play wide receiver, quarterback and running back all for the same team.

Thomas-Brown is excited for the fall football season. Football has been a huge part of his life. But before he starts his junior year at Edison High School in northeast Minneapolis, he needed to find a way to stay active and stay in shape during the summer.

One thing was for sure: There was no way he was going to sit at home all day during the summer doing nothing.

That’s part of the reason why he applied for a summer construction internship with the Minnesota Trades Academy.

Learning new skills and getting paid also influenced his decision as well.

“The Minnesota Trades Academy internship helped me with learning skills I can use everyday,” Thomas-Brown said. “And you get paid, too. That’s great.”

The Minnesota Trades Academy offers two different tracks for students to learn about the construction trades through hands-on experience. Track I is a six-week introduction to construction career opportunities. Youth who participate in Track I can move next summer onto Track II, a nine-week trade specialization course. The completion of both tracks can set a student up to launch a career in the construction industry, beginning with a registered apprenticeship with a Minnesota building trades union for those who are at least 18 years old and have earned a high school diploma or GED.

Participating in Track I of the Minnesota Trades Academy, and working on real construction projects, such as installing window frames and re-painting a garage, also started to bring back some memories for Thomas-Brown.

“I remember working with my grandpa when I was a little boy at his shop and I helped him build a shed,” Thomas-Brown said. “I didn’t consider it as a career at the time. But the more I work with tools and projects, the more I’m becoming interested in construction as a career.”

Even though Thomas-Brown’s first time using tools was years ago, he still remembers the rewarding feeling that comes with creating something.

“My grandpa was a good teacher and he helped me out with learning the tools and actually building stuff,” Thomas-Brown said. “Later in middle school, I kept building when I joined the robotics team.”

Through his internship with the Minnesota Trades Academy, Thomas-Brown has enjoyed learning about different construction trades, such as plumbing, welding, carpentry, pipefitting, etc., and using the tools that he had never known about.

“It’s nice to do this internship because it’s something I enjoy,” Thomas-Brown said. “It’s a good learning experience and I can think back to this after high school when I am in the real-world exploring my future career options.”

“For example, Tyler, one of the other students who’s an intern, was in Socratic seminar class at Edison and we’re friends. But I also met Rome, who’s in the program, too. He plays football at Brooklyn Center, we’ve been getting along well,” Thomas-Brown said. “I highly recommend the Minnesota Trades Academy internship. I learned a lot being with Phil O’Neill and Leah McGinley [MTA Team Leads] and it’s a very welcoming program.” 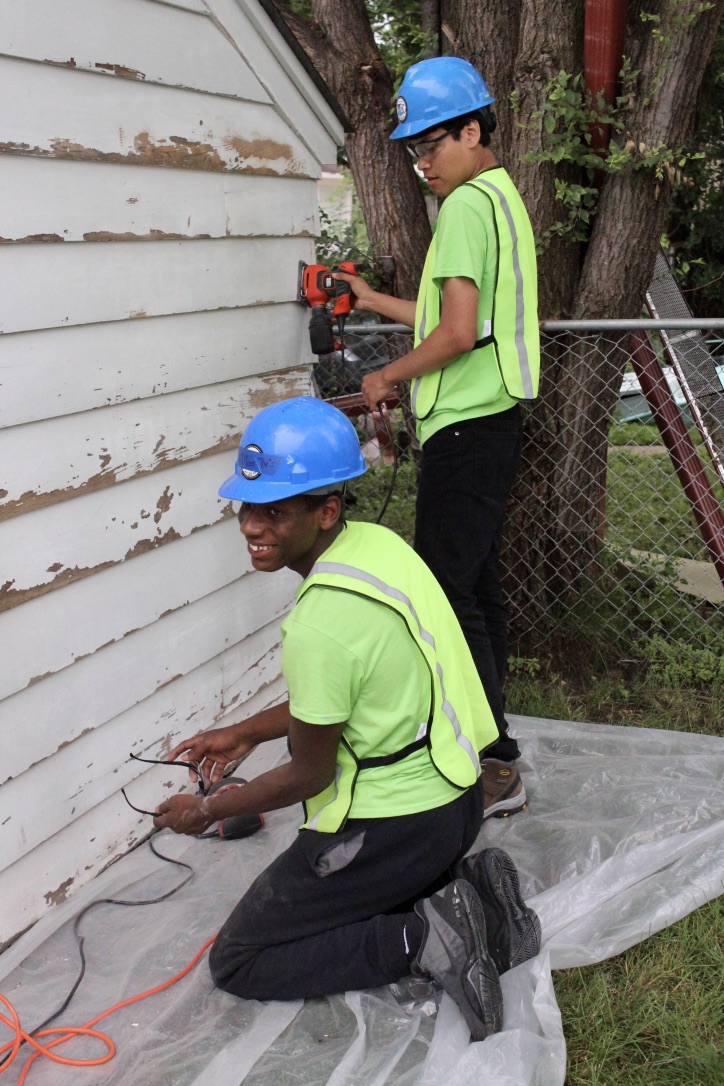 Thomas-Brown(front) sands the side of a garage in South Minneapolis. Thomas-Brown said his construction training is a pathway for him to help people in the community. Photo Credit:Karin Ellefson

After high school, Thomas-Brown is considering pursuing college or an apprenticeship in the construction trades.

“It all depends where I am at after high school, but this internship made me think a lot differently about my future,” Thomas-Brown said. “I’m excited.”