For Amanda Gardas, college or the military weren’t the answers. And then she found pipefitting.

In her senior year at St. Anthony Village High School, Amanda Gardas applied to attend the Minneapolis Community and Technical College (MCTC). Not out of any particular desire to continue her schooling or to pursue a specific career, but because that’s what her counselor strongly recommended.

“The school just expected me to go to college,” Amanda says. “That’s what they thought it meant to be successful. I wasn’t sure what I wanted to do or if college was right for me.”

Amanda was a bright student with an affinity for math so higher education seemed like a good next step, but to Amanda, something didn’t feel right.

So that’s why, after seeing a recruitment commercial on TV for paratroopers, Amanda enlisted in the U.S. Army instead of attending college.

The Army appealed to Amanda’s bravery and willingness to risk her own safety for others.

“For me, danger is no big deal,” Amanda says. “I’d rather take the risk than someone else.”

But despite the Army’s appeal it still wasn’t what Amanda was looking for, and so, after three years she left the service.

Thirteen years later, Amanda is a single mom with two kids, making $13.50 an hour as a chef at a local restaurant in St. Paul. One day, her friend, Cheryl, who works at the dry cleaners across the street, stops by and announces that she’s returning to her job as a pipefitter in the local union.

“I wanted to know every detail about what she did and how it worked,” Amanda explains. “The more I heard, the more I could picture myself doing it. I became enamored with the thought of becoming a union pipefitter.”

And so, after weeks of peppering her friend with questions, Amanda took the life-changing step and contacted Pipefitters Local Union 455, the pipefitters union for St. Paul and the East Metro.

Fast forward to today: Four years into a five-year apprenticeship program, Amanda says that pipefitting is the perfect intersection of math and working with her hands that had been missing from her life.

“Had I known about pipefitting when I was in high school I would have gone into it,” she says. “But, back then, in the early 2000s, it wasn’t on anyone’s radar screen. The choices were either go to college or go into the military. I don’t think my guidance counselor or teachers would have ever thought to suggest it as a career path – especially for a high school girl.”

After passing a basic math and reading test required by the union, Amanda enrolled in the St. Paul Pipefitting Diploma Program, a year-long, full-time day school program where students begin to learn the basics of pipefitting and welding from union teachers.

Going to school full-time while raising two children and working evenings and weekends was no easy feat. In order to make it into the union after graduation, a students’ attendance and grades in the diploma program must be top notch. 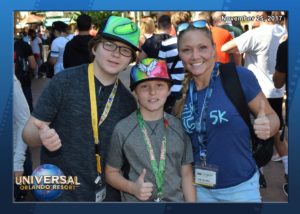 “It’s hard to tell a 35-year-old single mom to quit her job and go back to school,” Amanda says.

“I graduated from the St. Paul College program on a Friday and started working that next Monday making $20 an hour (50% of scale) plus insurance and a pension,” she says.

“When you’re making a living wage it really puts things into perspective. $13 an hour isn’t a living wage. Nor is $15 an hour a living wage,” she explains. “I didn’t realize what I was missing out on until I landed in this apprenticeship program. I really hadn’t bothered to think about saving money for the future because I was pretty much living day-by-day.”

Now Amanda is grateful that she can provide for her family, which includes having healthcare insurance, a dental plan, life insurance, and a pension through the union.

“I can manage my debts and I can afford vacations. I can show my kids the world with the money I’ve earned from pipefitting,” she says. “For example, I was able to send my son on a school trip to Spain – a once-in-a-lifetime experience for him. That sort of thing was never in my scope before.”

But as much as she appreciates those opportunities, the money and benefits comes second to doing work that she feels proud of.

“I got into it for the job − to work with cranes and rigging − not for the money and the benefits,” she explains. “I found my place and I’m happy to be in the trades working with my hands on a team. I feel really good about what I’m doing. I feel pride in my work, and that what I’m doing really matters.” 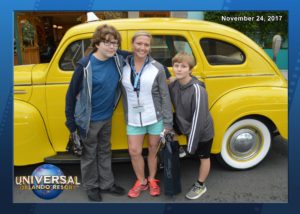 “Think about all of the pipes that are running throughout our cities or the pipes that are needed to process things, like oil and gas,” adds Amanda, who currently works at the Andeavor refinery in St. Paul Park, Minn. “All of us take it for granted. We need people like me to build those pipes and maintain them.”

Introducing the Next Generation to Pipefitting

Career satisfaction and the ability to provide for their family might be enough in life for some people, but not for Amanda. In addition to her apprenticeship Amanda, for three years she has been a part of the Minnesota Trades Academy (MTA), introducing Twin Cities area middle- and high school students skills such as soldering, welding, and demonstrating how their high school algebra is actually used by pipefitters in a hands-on setting.

“If they want to do a job like mine it’s about making their math relevant to what they want to do,” Amanda says. “I love math, but I was like a lot of students who wondered, ‘What am I ever going to use trigonometry for?’ And here I am today, using my algebra and trig on the job.”

Amanda is involved in the Minnesota Trades Academy not just to teach, but to also be a role model for young women.

“From a career standpoint, construction isn’t very approachable, especially for young women,” Amanda explains. “But I want to change that. I want to help those high school girls, who, like me 13 years ago, wondered what they want to do with their lives. If I can help just one young person by sharing my experience, I would feel a lot of satisfaction in that. So, that’s why I do this. I talk to everyone I can about my job.”

“It’s not the norm for women to be pipefitters but it shouldn’t be a big deal,” Amanda says. “There shouldn’t be a line between a boy’s job versus a girl’s job. It should just be if you have the skill and desire, go for it!”