MINNEAPOLIS/ST. PAUL, Minn. – For the graduating class of 2020, the future is looking brighter — especially if you’re a student who questions whether college or the military is right for you.

That’s because there’s a third option: a career in Minnesota’s building and construction trades.

Minnesota’s building trades unions, construction companies and the State of Minnesota have teamed up to get the word out to Minnesota’s high school students about good-paying, highly satisfying careers in the construction trades.

At the center of their efforts is ConstructionCareers.org, a website that introduces high school students to 30 different career options in Minnesota’s building and construction trades.

“Most Minnesota students feel pressured by their parents, teachers and peers to enter a four-year college or university after high school,” said Sarah Lechowich, Senior Director with the Construction Careers Foundation, a St. Paul nonprofit that oversees the Construction Career Pathways initiative. “But some enjoy learning through doing and can’t see themselves in college. That’s where we come in – to introduce the idea that you can be a success and make good money while working with your hands as an electrician, plumber or ironworker.”

In addition to providing career information, students who are at least 18 years old and have earned their high school degree or GED can begin the application process through ConstructionCareers.org for an apprenticeship in the building and construction trades.

Lechowich said apprenticeships offered by Minnesota’s trade unions and their contractors are typically multi-year programs where an apprentice works with a journeyperson to learn a specific craft and skill set, such as pipefitting or operating heavy equipment. Once accepted, an apprentice immediately earns a paycheck while learning. In addition to incurring no college debt, building trade apprentices also obtain healthcare and dental insurance and are enrolled in a union pension plan.

As an introduction, during the school year, high school students can learn about construction careers through hands-on opportunities sponsored by Construction Career Pathways, including:

The ultimate goal of Construction Career Pathways is to help fuel Minnesota’s construction industry with the talent it will need in the decades ahead.

“We want all students to learn about careers in construction from real people who look like them and come from the same communities as them,” Lechowich said. “We want them to see that if you have an interest in working with your hands, you are wanted in Minnesota’s construction trades.”

Educating Parents and Teachers, Too

ConstructionCareers.org also is a tool to help parents of high school students, high school teachers, guidance counselors and principals better understand apprenticeship opportunities and the positive benefits of a career in the construction trades.

“We see parents and teachers who are searching for answers, too,” Lechowhich said. “They see the high costs of college and they also see students who look more happy at building things than studying in a classroom. Our website and programs can provide the information they need to better answer career questions for their students.”

A Habitat for Humanity house.

The siding on an airplane hanger in Lake Elmo.

What do these three building projects have in common?

All three served as real-life, outdoor classrooms that allowed high school students who participated in the Minnesota Trade Academy Summer 2018 program to learn about careers in construction. 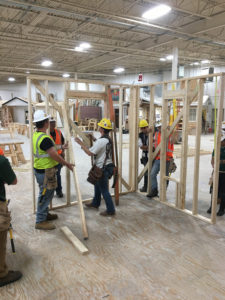 The Minnesota Trade Academy is one of the programs offered through Construction Career Pathways, a statewide nonprofit effort supported by trade unions, construction companies, a growing list of Minnesota school districts, and the State of Minnesota (DEED) that have all come together with the mission of introducing Minnesota’s young people to skilled careers in Minnesota’s construction industry.

The Minnesota Trade Academy program serves students, ages 16 to 20 years old, who primarily live in the Twin Cities metro area. Students work 20 to 30 hours per week and are paid as they work on real-life projects, such as building a Habitat for Humanity home, which will eventually become the home for a family in need. After a week of safety training, the students spend time at different union training facilities located around the Twin Cities, where they begin to learn real-life skills, from house-building carpentry to welding pipes. Trade unions participating in the 2018 MTA program included: 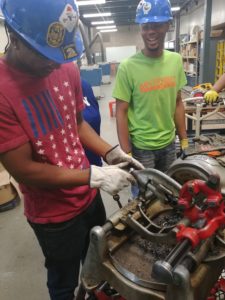 The annual summer program offers two tracks: Track 1 students receive an introduction to the wide array of trade jobs available to them, while the more advanced Track 2 session prepares students to select a specific career path and helps them gain the knowledge necessary to enter the workforce, such as applying for an apprenticeship offered by one of the participating trade unions. For example, if a student thinks that they would like to be a pipefitter, they could apply for a five-year paid apprenticeship program offered by one of the local pipefitter unions.

For an idea of what students do during the Minnesota Trades Academy, check out this video compiled by the Saint Paul Public Schools.

Through the generosity of local trade unions, which make their apprenticeship training facilities available to the Minnesota Trades Academy, high school students are left with no doubt about their choices in pursuing a career in the trades. The program offers the chance to expand the horizons of young people who are often pressured to pursue four-year college programs or enter the military. 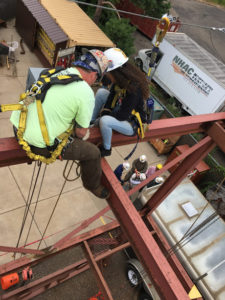 According to Sam Ebute, director of the Minnesota Trades Academy, the problem with the “college only” mindset is that many of students, as well as their parents, think that they must go to college to be a success in life.

“Some students will go to college even if they have no idea what they want to study,” says Ebute. “Two years can pass and a student may still not know what they want to do or they may have burnt out on attending classes while holding down a part-time job. All the while, accumulating student loan debt.”

With the Minnesota Trades Academy program, Ebute wants to show middle school and high school students that there is another path to consider outside of college or the military. By building something and being paid for it, the program participants have a clear idea of what their work is worth.

“Young people who are visual and hands-on learners don’t realize the financial benefits of this work,” says Ebute. “We stress that after four years they will have been paid to learn and have the equivalent of an associate’s degree.” 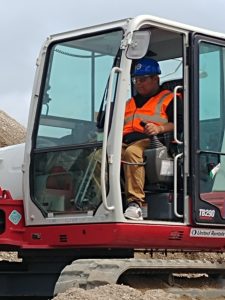 It’s opportunities such as these that have students from all backgrounds getting started in the Minnesota Trades Academy.

Take Blake, a student from White Bear Lake, who shared during his interview process with Ebute that while his relatives are all white-collar professionals, he is excited about being the first blue collar worker in his family.

Part of the program’s goal is also to add diversity to the construction fields, a facet that benefits both workers and the communities. During the summer 2018 program, female students accounted for 20 percent of those participants and 76 percent came from underrepresented communities. (Check out the experience of Ahleah and Halle, two Saint Paul students who participated in the Minnesota Trades Academy this past summer).

“Our work is all about breaking down barriers, we search within communities to make sure that the students in our program reflect the neighborhoods in which we build,” says Ebute. “There is something to be said about the value in seeing things built in your neighborhood by people who look like you.”

Public and private partnership has been a key to accomplishing this goal. With programs such as Minneapolis’ StepUp, St. Paul’s Right Track and White Bear Lake’s U Lead initiatives helping the Minnesota Trades Academy with administration and recruitment, the program has flourished as young people from those cities and neighborhoods have discovered the program. 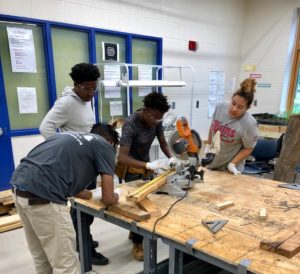 With 66 graduates from the program this past summer, young adults are responding to the chance to “earn as they learn.” Minnesota Trades Academy doesn’t end after graduation however, as the program eventually circles back to offer skilled trades professionals the opportunity to teach young people as part of the program.

“It’s magical to watch skilled workers, such as Amanda, a pipefitter who is in the fourth year of a five year pipefitting apprenticeship program, give back to the high school students by sharing what she has learned,” Ebute says. 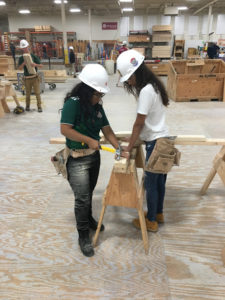 Ebute points to a subtle, but important shift in the status quo. The Minneapolis Public Schools until recently had a mission statement that focused only on preparing students to be “college ready.” Now, that statement reads: “Every child, college and career ready”, an important acknowledgment of the amazing options available through the Minnesota Trade Academy.